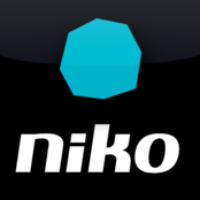 No Translation available yet

You have English selected as language but this page has not been translated yet. Translate the page or view the content in the default space language below.

As from programming software version 1.14 the following features have been added:

Programming the Niko Home Control mini detector 550-20220. It can be selected as input or condition or can be used in an action as a light sensor, motion detector when it's both light and dark, or a motion detector only in the dark. The switch-off delay can be programmed, as well as the light intensity to which the detector responds. It is also used to set the sensitivity of the motion sensor. The following examples will help to inspire you for the programming and setting of the mini detector:

The following improvement has also been introduced:

Reminder: the following new applications have already been added in previous versions:

From programming software version 1.13 onwards, installations equiped with the new connected controller can be programmed.

In addition, the following features have been added:

As from programming software version 1.13.1 the following features have been improved: